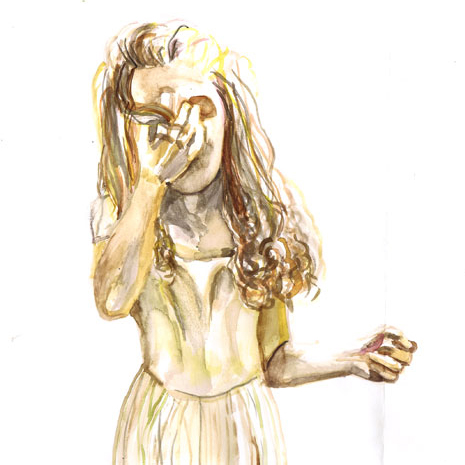 I live, work, blog, and draw in Northern California. Previously I have lived in Oakland, where I was born and then lived for several years after college; Dallas, where I spent my adolescence; and the New York Hudson Valley, where I attended Bard College and earned my BA in Studio Arts. Other than drawing, painting, (and otherwise getting pigment under my fingernails), I spend my time experimenting with vegan cooking, thinking about manatees, and going to the beach with my dog. I’m an earthbender, a druid, and a Ravenclaw.

This site is a showcase of only my best work. Frequent updates of almost everything I make, including work that doesn’t make it here, can be found on my art blog and Instagram.

Much of my work is about fairy tale magic. In fairy tales, unlike the more narratively familiar and internally consistent fantasy magic, there are no rules; this is the point of magic, and possibly the capriciousness of fairies. In fairy tale magic, things simply happen. If one woman eats the pome of an apple and the other the peel, the child of the first will be heavy and pale, that of the second thin and ruddy. A comb turns into a forest not because it is an enchanted comb or the woman throwing it is a witch or there are fairies around, but because placing a forest behind them is how the characters must escape their pursuers. Events occur because they are visually, thematically, and narratively satisfying, not because they make any sense or are explained by a consistent system of magic or because they follow logically from what is previously known. In fairy tale magic, the reader already believes in magic. Furthermore, in fairy stories, or more correctly animal stories, animals have rich personal lives like any other character in literature. Like many animal lovers, I relate to, anthropomorphize, and project onto animals. The animals I draw are characters, the drawings of them portraits. They have personalities, just like the other people I draw. In drawing a world of fairy tale magic, animals are characters, the tongues of dragons must be collected, drawings cast magic spells, animals and people are friends, dresses fit in walnut shells, and visual and poetic logic overrides formal logic.